Early in the morning on May 6th, 1941, the residents of Greenock, (Inverclyde, West Scotland) were awakened to the horror of WWII’s indiscriminate destructive force. It had been chosen as Nazi Germany’s next seemingly random Luftwaffe blitz target. Over the course of 48 harrowing hours, the industrious little city was virtually leveled. Nearly 300 civilians were killed, over 1,200 injured and 10,000 of the 18,000 homes and businesses were damaged, with 1,000 completely destroyed. 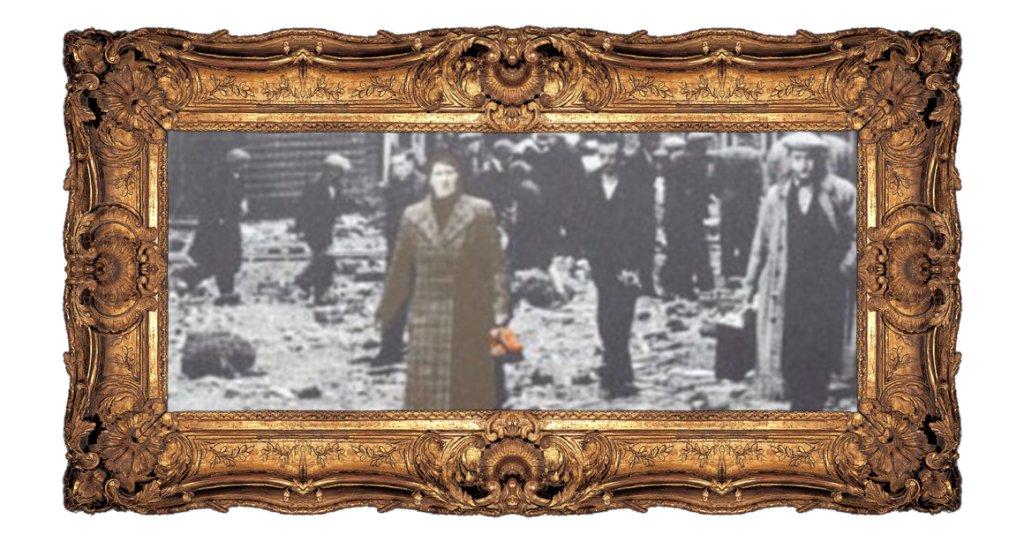 This photograph was captured by Mr. James Hall and was included in a book entitled, “The Greenock Blitz” by Inverclyde District Libraries, 1991. The photo shows Mrs. McGarrigle, a good Scottish dame, marching through the ruin that was once her city, carrying home a basket of oranges to make Scottish Marmalade. The photo captures only one moment in this woman’s life, but clearly expresses her unwavering fearlessness and utter determination in spite of the chaos that her world had just become.

Damn the torpedoes! We’re out of marmalade!  Her courage and audacity are the inspiration behind the name of this business.

Mrs. McGarrigle’s came to life in 1988, born of the spirit and determination of its founder, Janet Campbell.

Though humble in its beginnings – manufacturing condiments in the basement of one of Ottawa’s hostels after-hours – Mrs. McGarrigle’s has morphed into a stylish gourmet food, fine kitchenware and home décor retailer – a unique epicurean destination in the National Capital area and an undeniable lure for those who enjoy fine cooking, fine dining and fine living.

As the business itself, the store – located in historic and picturesque Merrickville, Ontario – has expanded again and again.

Now occupying 3,000 square feet in what was originally an 1888 general store, it not only accommodates the retail business, but also serves as premises for the mustard and condiment manufacturing operation as well as a respected cooking school.

Chefs from the Ottawa area as well as food writers and Ontario wine producers demonstrate their skill and products, assisting customers in their food and beverage preparation and appreciation.

Testing and tasting is a featured characteristic at Mrs. McGarrigle’s; customers are often greeted by tempting aromas wafting through the store – sometimes the result of delicious demonstrations and sometimes originating from the kitchen where production often runs seven days a week to keep up with constant demand of the nearly 300 retail outlets across the country now stocking Mrs. McGarrigle’s mustard, preserves and condiments.

It’s no surprise that Mrs. McGarrigle’s market is willing to travel significant distances to consume the shop’s offerings of local and international gourmet products. One visit and you’ll understand the pull, too.

Our retail store is well worth the visit and would make for a great day trip.

We look forward to seeing you.